We are excited to announce that we have hired two attorneys who will work exclusively on cases of family separation, representing both detained parents and their children with the goal of reunification, not detention. This is only possible with your support, thank you! 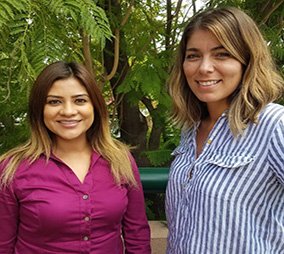 Maite Garcia is a longtime advocate for immigrant rights and brings a wealth of experience to the position. Maite was born to Venezuelan and Cuban-American parents and grew up in Miami. After graduating from the Florida Coastal School of Law, she worked at a criminal defense firm in Miami. She later represented unaccompanied children in deportation proceedings while working with Americans for Immigrant Justice in Miami. Shortly after joining the Florence Project this year, Maite witnessed the influx of detained children who were forcibly separated from their parents. “I remember the first day we saw a large number of young kids,” she says. “I got to the shelter and all I heard were screaming children.” Maite is eager to expand representation for parents and kids, and she’s been speaking out about the trauma of her young clients.

Maite will be joined by attorney Eugenia Ojeda. Eugenia migrated from Mexico with her family as a child, and remembers being impacted by the discrimination her family faced in the U.S. “My dad always told us to stand up for ourselves,” she says. “I wanted to be an immigration attorney so that I could stand up for those who were in the same position I was once in.” Eugenia graduated from the University of Idaho College of Law, and previously worked at a private immigration law office in Phoenix, where she defended adults in deportation proceedings. Eugenia is well aware of the obstacles faced by many of our clients who are detained in Eloy and Florence, and is excited to bridge the work of the adult and children’s teams in her new role at the Florence Project.

Although immigration policies seem to be changing on a daily basis, one thing is clear: there are still thousands of parents who are detained and separated from their children. We are grateful to have Maite and Eugenia dedicated exclusively to family separation cases, and will keep you updated as we grow our team, thanks to your support. We will continue to fight until every child is reunited with their family and their rights to apply for protection in this country are honored and respected.