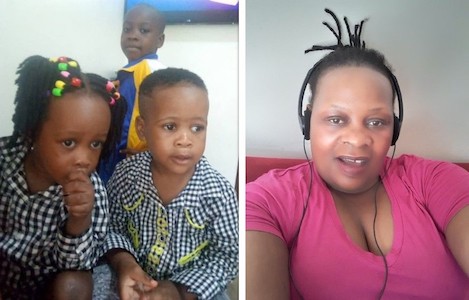 Mary (right) and her children

A Ugandan asylum seeker named Mary appeared for her final immigration court hearing with her attorney, Lauren Kostes from the Florence Project, standing by her side. “I was really scared. So so so scared. So worried,” Mary says. “I was thinking they may deny me.”

Mary was persecuted for her political beliefs in Uganda. She survived violent atrocities, making the court hearing–and cross examinations from the government–very difficult, as she had to recount her trauma.

“I was already discouraged,” Mary says of her six months in detention. “Hopeless a lot. Living in detention is the hardest thing in this world. You are not free. I could not sleep, I could not do work, so I started to develop diseases like depression from the trauma.”

“But Florence Project did their level best to organize my case, and finally I won.”

After she won, Mary called her family. She couldn’t afford long-distance calls while she was detained, so it had been a very long time since they talked. When she got ahold of her family, she stared to bawl.

“I was just crying because I could not believe I was out of detention,” Mary says. As soon as possible, Mary will bring her two children to the United States. For now, they chat via video. She sent the above picture for us to share.

“I am very, very, very grateful. Very thankful. I don’t know how I can even thank you guys,” Mary says.