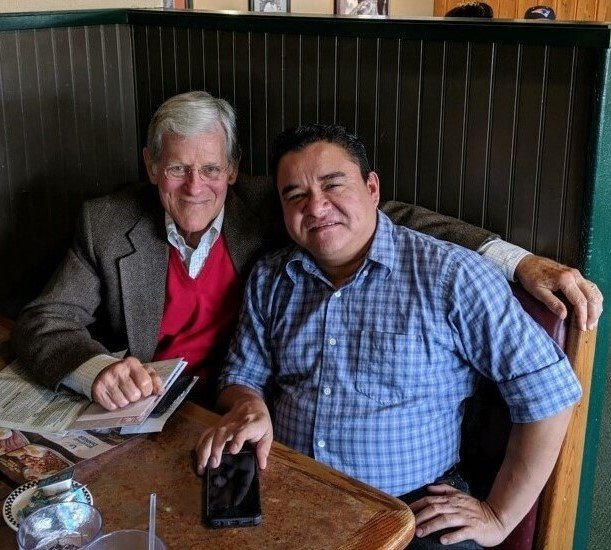 Before 2018, Wilfredo was never interested in politics. He sold produce in León, Nicaragua, and on evenings his home was a gathering place for neighbors to relax, joke and gossip. But when the government announced plans to cut pensions and increase taxes, thousands of Nicaraguans organized marches to oppose the initiative, and Wilfredo joined the movement.

Motivated by civic fairness, he participated in peaceful protests that were met with violence. Nicaraguan police and paramilitary forces viciously attacked demonstrators across the country, killing 70 in a brutal crackdown that shocked of the world.

Neighborhoods were raided, and buildings lit on fire. As hooded men broke through Wilfredo’s front door, he escaped through the back, fled León, and spent months in hiding as the bloody unrest continued, with hundreds reportedly killed.

“León is my city. I love it,” Wilfredo recalled with tears in his eyes. “It hurt me when they burned it …We never imagined that the government would start killing people, that they would call us terrorists, that they would disappear people, just for participating in a peaceful protest.”

Even while hiding in a neighboring city, Wilfredo was recognized by a pro-government militia that threatened his life. He realized he couldn’t go home. “I couldn’t put my family at risk.” He asked protest leaders what to do. “They told me, ‘Go. Run,’” he recalled.

Wilfredo presented for asylum at the U.S. port of entry in Nogales, Arizona. Immigration officials sent him to a detention center, where a Florence Project attorney from our Pro-Bono Program met him and referred Wilfredo to retired ASU law professor Dale Furnish.

“When the news of family separation came out, I was devastated, yelling at the television,” Dale recalls. “My wife said, ‘You’re a lawyer. Don’t just stand there abusing the T.V. Do something.’”

“Wil was the best client I’ve ever had. And I could call [my Florence Project mentor] Katie at any hour. She was there no matter what.”

Wilfredo suddenly had legal representation, and a friend. Dale visited him weekly, whether he had case updates or not. Together, they fought hard for asylum—and they won! “But it wasn’t just his visits,” Wilfredo says. “When I left the detention center I didn’t have anywhere to go. [Dale] said, ‘No, of course you have somewhere to go.’ He opened his doors for me.”

Wilfredo stayed at Dale house until he was able to get his own apartment in Phoenix, where he intends to bring his family once his Lawful Permanent Residency is official.

Thanks to the Florence Project’s Pro-Bono Program, Wilfredo can remain safely in the United States.