For many of our clients, winning their immigration case is just the beginning of a long and complicated process to integrate into life in the United States. Getting settled can be complicated and full of processes that are difficult to navigate, particularly when language barriers and lack of transportation are involved. This was no different for Cesar, an 18 year old young man from Honduras who won his immigration case last winter, having been granted Legal Permanent Residence (LPR) status. Eager to begin his new life, Cesar needed to obtain his LPR card, his state I.D., and his social security card. However, without the proper guidance, Cesar did not know where to start. 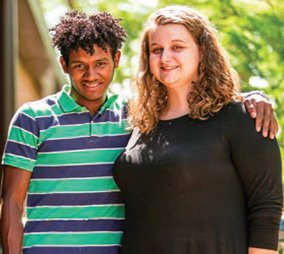 The Florence Project recently expanded its Integrated Social Services Program, with social workers providing support to clients who need services outside of legal representation, including clients like Cesar. Thankfully, as a social worker for the Children’s Program, I was able to advise Cesar that in order to receive his LPR card, he first needed to go to an InfoPass appointment with the United States Citizenship and Immigration Services office (USCIS). There he would go through a brief screening of questions and have his picture taken in order to receive his LPR card. A few weeks later, Cesar received his LPR card in the mail, and was finally ready to apply for his social security card. Little did he know that this was no easy task. Because Cesar is from Honduras, the law states that he would need to present an original birth certificate in order to request a social security card. Generally speaking, obtaining an original birth certificate is not difficult; but this was not the case for Cesar. First, Cesar would have to travel to the Honduran consulate in Los Angeles, the nearest facility in the U.S. that would produce the birth certificate. Second, Cesar would have to get his parents’ permission (as a minor) to obtain the certificate. This alone was a major problem as Cesar never met his father and hadn’t seen his mother in nearly a decade. Despite our advocacy for Cesar, the social security agent denied the request for the social security card and remarked that obtaining a state ID would be helpful in the application process.

Without faltering, Cesar and I set off to the Department of Transportation to apply for a state ID. There, officials hesitated to approve the application, but with persistence the Florence Project was able to secure Cesar’s state ID. In less than 2 weeks, Cesar received his ID, and with this in hand he was able to successfully apply for his social security card. After nearly a month and a half of overcoming administrative barriers, Cesar, with the help of the Florence Project, had all of the documents he needed to begin his new life as a U.S. resident. Cesar now has a job, attends school, and is an active member of his community.

With the help of the social services team at the Florence Project, Cesar also understands that he has new responsibilities, including paying taxes, registering for selective service, and following state and federal laws. It is important to recognize that once a legal case is won, there is still work to be done, so that our clients are integrated into our communities. It is the goal of the social services team to remove any barriers that may hinder clients like Cesar from successfully starting their new lives. Thanks to your support, and the perseverance of the Florence Project staff, Cesar has the tools to succeed and is well informed of his rights and responsibilities, and plans to apply for citizenship in 5 years.