Every weekday at 5:30 a.m., *Silvestre takes a bus to a construction site and moves earth in a land he longs to call home. The 18-year-old works with an uncle doing ground excavation for new housing developments in Tucson, Arizona. After work, he commutes back home to take online classes from a charter high school, studying math, science, and English. He also plays with his aunt’s dogs if he has time. But looming over everything is the threat of deportation.

In February 2020, Silvestre lost his asylum case. Whether he can remain in the United States will depend on the result of an appeal filed by his Florence Project attorney. Silvestre connected with our Children’s Program at age 16 after he fled circumstances in El Salvador that no child should endure.

“I want to learn English very well and to learn a lot about construction too. I’m already using heavy equipment,” Silvestre says about his schooling. His education in his home country was cut off when his mother stopped paying tuition. Silvestre began working full time at age 14, doing ceiling work to support himself after his mother stopped feeding him as well.

Sadly, Silvestre’s favorite class, the one that helped him cope with past trauma, is not offered online and is not safe to practice in a pandemic. As a student previously at a high school in Tucson, Silvestre excelled in Mexican dance: Baile Folklorico. He even taught his instructor and fellow students traditional Salvadorian dances and went on to perform with a celebrated group at mariachi concerts in Southern Arizona.

“I miss it a ton,” Silvestre says. “I like how beautiful we look when we do well together.” While the girls twirled their dresses, the boys would tap, spin, and smile. Silvestre’s stress seemed to float away.

“My teacher used to say, ‘When you dance you forget your problems,” Silvestre recalls. “That’s what I like about dancing. I forget everything that happened in my country—the difficult things in my past. I focus on giving a good show to the people watching because they have a lot of fun. They take many videos and pictures. I loved how famous we were, representing Tucson.”

In almost three years of working with Florence Project legal advocates and social workers, Silvestre has grown quite a bit. He took time to open up about his past and has since made incredible progress overcoming the difficult events he fled.

In addition to fighting his asylum case, the Florence Project applied for Silvestre to receive a Special Immigrant Juvenile Status (SIJS) visa—a form of relief for minors who suffered abuse, abandonment, or neglect in their home countries. The application was approved shortly after the immigration judge issued Silvestre’s removal order. But because of a backlog, SIJS visas take years to become available, and Silvestre can still be deported while he is waiting.

Historically, judges have allowed a child to wait for the SIJS visa to become available by granting continuances in their court hearings. However, over the past four years, courts have increasingly ordered deportations of children without allowing for pending SIJS visa applications to resolve, which is what happened to Silvestre.

“I thought the immigration police were going to handcuff me and detain me right there in the court,” Silvestre recalls, his voice quivering. “Then I thought they would come for me in the street or at my aunt’s house. I had many bad thoughts.” If the Florence Project had not filed an appeal, Silvestre would have been deported. What haunts him now is a recurring fear of the violent gangs in his home country. He’s also disturbed by the “ugly things” he’s heard said about migrants like himself in the U.S. “If I’m allowed to stay in the United States I will be recognized as a good person.” 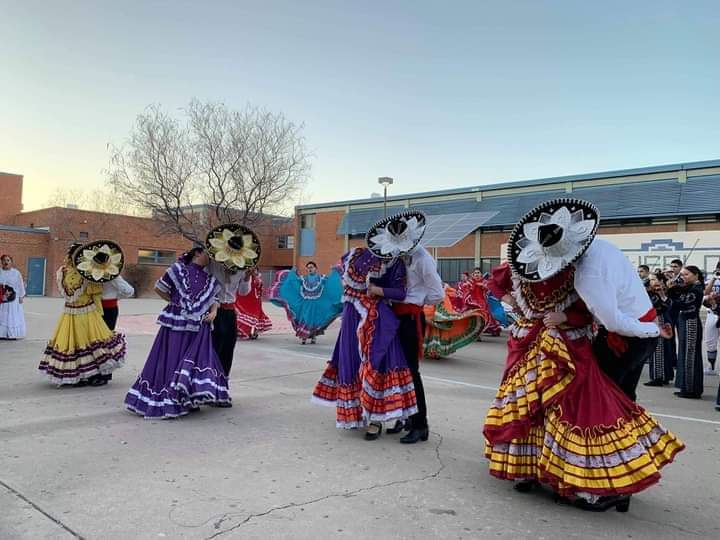 Silvestre (second from left) with his baile folklórico group.

Silvestre has become active in the Tucson community. He likes to make pupusas, flat cornmeal cakes filled with meat or cheese, to share at cultural events, including at soccer tournaments between immigrants from Mexico, El Salvador, Honduras, and Guatemala.

The young man offers his thanks to the Florence Project and its supporters for their help getting enrolled in the charter school, which fits better with his work schedule, and for assistance in securing online learning supplies. He says he hopes earning a diploma convinces the immigration court of his potential. But his attorney Rebecca Curtiss assures him it’s not about that. He has nothing left to prove. She will fight for his relief.

“Congress created the Special Immigrant Juvenile status in 1990 as a form of humanitarian relief specifically for vulnerable young people like Silvestre,” says Rebecca. “We are simply fighting for him to be able to study, dance, work, and grow up with the safety that he deserves.”  Thank you for making this possible.