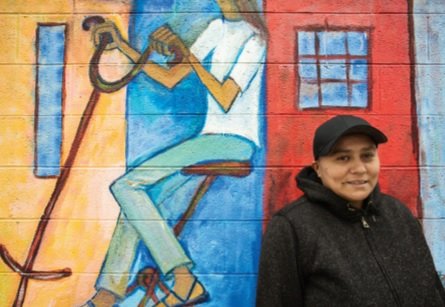 As a lesbian growing up in the mountains of El Salvador, Imelda faced constant discrimination and violence. She was bullied for dressing in boy’s clothes and survived physical violence and beatings from multiple men.

When she was 19, Imelda was violently raped by a gang leader. Years later, the gang leader called her from prison, demanding that she pay him conjugal visits.

“I was afraid that he would send someone to kill me,” said Imelda. “So I left the country.”

When she first crossed the border, immigration authorities caught Imelda and immediately deported her. “They didn’t ask me if I was afraid. Nobody told me about asylum.” Imelda was deported twice more, a violation of her rights as an asylum seeker.

Because of these deportations and despite the fact that her rights had been violated, Imelda no longer qualified for asylum. Instead she would have to apply for “withholding of removal,” a legal remedy for immigrants who are afraid to return to their countries but are barred from asylum.

“Compared to asylum, it’s five times harder to win withholding,” says Adam, who represented Imelda on a volunteer basis after she was released from detention. In other words, her chances of staying in the U.S. were slim. Still, Imelda was determined to fight for herself and her future, with the support of the Florence Project.

In addition to fighting for herself, Imelda fought for the other people she met in detention. “When people got bullied she would stand up for them,” says Liz, one of her Florence Project attorneys.

Imelda fought for herself through a series of hearings, denials, and defeats. Finally, on the day of her bond hearing, Imelda represented herself and convinced the judge that she deserved a chance to be released. She was released on a $15,000 bond.

She was out of detention, but she still had to fight her withholding case to get to the finish line. After months of strategizing with our staff, Imelda faced the court and told her story in the final hearing. Twenty-two members of the local community showed up to support her.

After nearly two years of working with her, Adam knew Imelda’s case by heart and eloquently defended her before the judge. Because of their collective effort and Imelda’s steadfast dedication, the judge granted her withholding of removal. Adam and Imelda are still fighting for her to quality for asylum which would give her a path to permanent residency. In the meantime, Imelda is working and thriving in the U.S.