Golden McCarthy is Named Deputy Director of the Florence Project

Golden McCarthy is Named Deputy Director of the Florence Project 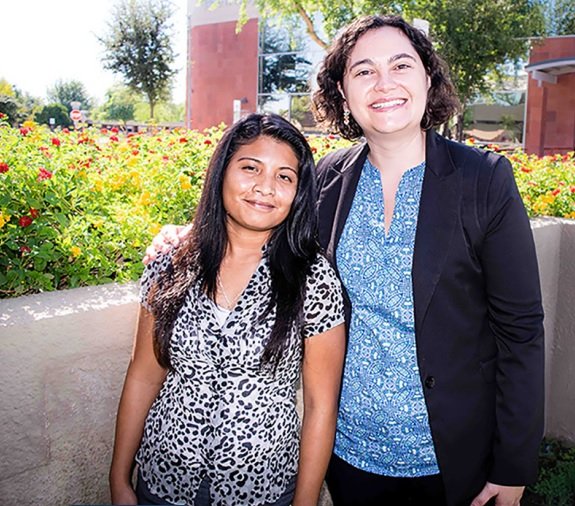 Golden grew up watching her grandparents organize in their Mexican-American community, talking with community members around their kitchen table. Her grandparents instilled in her values of social justice, as they fought for workers’ rights in Colorado. From the time she was a young child, she witnessed the power of empowering others, something that would carry through to her adult life as an immigration attorney.

“When I started at the Florence Project, I was compelled to continue my life’s trajectory of working with and supporting immigrant communities,” Golden says.

After high school, Golden moved to New York where she went to college and eventually went on to law school at the City University of New York (CUNY) School of Law. While in law school, Golden worked in the Economic Justice Legal Clinic, where she helped students across the CUNY network with legal and non-legal advocacy related to economic justice issues. She also served in the Immigrant and Refugee Rights Clinic at CUNY Law, assisting her first detained client, a man detained at Guantanamo Bay, and was a Fellow for the Center on Latino and Latina Rights and Equality.

Golden’s legal studies, passion for public interest, and lifetime of advocacy on behalf of and alongside immigrant communities led her to the Florence Project in 2013, where she started as a staff attorney with the Children’s Program in Phoenix.

“I received amazing mentorship to develop my representation of detained children and teenagers, and I was encouraged to try new legal theories and push myself as an advocate,” Golden says of her time as a staff attorney. “My direct work with my clients, kids who had been traumatized, abused and abandoned, taught me to listen closely and to counsel them to make the best decisions for themselves,”

Golden recalls one client whose story made a lasting impact on her. This young woman fled El Salvador when she was 16 after being sexually abused by a family member who was also in a gang. Her asylum claim was complicated and was delayed for a number of reasons beyond our control. She was working hard to go to school and find stability in Arizona, but it was challenging with the uncertainty of her legal case and thus her future. When her asylum was finally granted, she was energized with all the new possibilities in her life. She immediately began to make plans to apply to college.

“To see this young lady growing and thriving, and to know that she will one day be a leader in our community is incredibly exciting,” Golden says.

With her transition to deputy director, Golden will have the opportunity to provide that same mentorship and guidance to new immigration attorneys across both our Adult and Children’s Programs. We are so fortunate to have someone with Golden’s experience, lifetime of advocacy, and dedication in this role.

“Now in my new role, I get to support and fight beside intelligent and dedicated attorneys, social workers, legal assistants, and administrative assistants with one goal in mind – providing and expanding our holistic legal services to those detained in Arizona. If I do my job right, the Florence Project will provide more exceptional representation and social services to all our clients than ever before.”

Golden is a highly skilled manager and handles every situation with grace and an impeccable sense of humor. We are honored to have Golden in this new role and look forward to her continued leadership with the Florence Project.