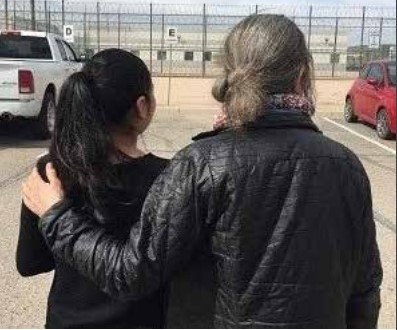 At the age of 14, Elbia was first approached by a 15 year old boy who asked her to be his girlfriend. When she refused, he pressured her relentlessly. Two years later, Elbia was living with him, was raped repeatedly, and found herself trapped in an abusive relationship. Elbia became terrified of her partner’s entire family. Her partner’s dad would beat his wife, his daughter, and even her. He would chase her around the house, forcing her to run into a bedroom and slam the door shut.

In spite of her multiple attempts to leave him and move in with her family, Elbia found it impossible to escape. Each time she tried to leave, he would enlist the rest of the community to force her back into the relationship. Since she lived in a small town with no law enforcement, Elbia had nobody to call when her partner beat her. After years of sustained abuse, she courageously fled.

Upon arrival at the border, where Elbia voluntarily presented herself, immigration authorities took her into custody and she was held at the Eloy Detention Center. Florence Project attorneys met Elbia at Eloy, and knew immediately she had a strong asylum case on grounds of domestic violence abuse. The Florence Project was able to represent Elbia, co-counseling with the Center for Gender & Refugee Studies at UC Hastings Center for Gender and Refugee Studies, experts in domestic violence asylum law.

Elbia had been detained at Eloy for a year and two months before her final hearing. She found being in detention extremely traumatizing. “During my first court hearing, I couldn’t bear it. When they asked me about my past I suddenly felt such despair, I started to cry uncontrollably until they gave me a water break.” Unbelievably, the power went out during her final hearing and it was postponed for another two months. Elbia couldn’t bear the thought of being detained any longer, and broke down in tears.

About a month later, we were able to schedule a bond hearing. Sadly, the judge set a $20,000 bond, stating that she was an extreme flight risk. Again, Elbia was devastated. Two community members visiting her in detention were so touched by Elbia’s story they pooled their savings and paid the $20,000 bond. She was released the next day.

A few months later, it was time for her final hearing. Elbia held such strong composure, despite aggressive questioning from the government attorneys and the judge. In the end, the government didn’t even present a closing argument. The judge didn’t rule on the case at the end of the hearing, but personally called our attorney the following day to let her know that he granted Elbia asylum.