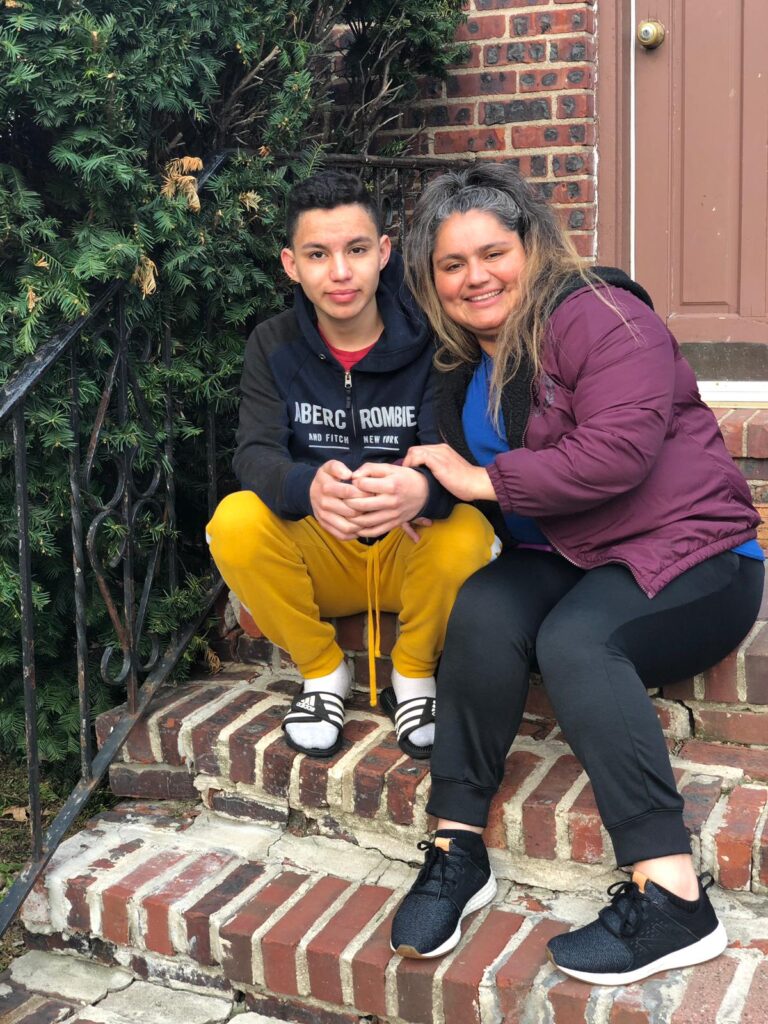 One day, when Betsaida was in detention, the other women crowned her queen.

Indeed, Betsaida is a legend around the Florence Project offices. Despite her two years in detention, her two years separated from the son she’d immigrated with, she offered our staff laughter, hope, and strength every time we visited her.

When Betsaida arrived in the United States in 2017, fleeing life-threatening violence at the hands of her partner, she was separated from her 11-year-old son, Nahum. Though Nahum was detained by the Office of Refugee Resettlement and then released to family members in New Jersey, Betsaida was sent to an ICE detention center in Arizona.

“The day that they took my child from me…It was so cruel. I didn’t want Nahum to experience what I suffered. His father had hit me with his motorcycle. He broke my clavicle.

“Nahum was so little when we arrived. He was sent to live with my brother, who he’d never met. Imagine, they tear you from one family and put you into another.”

Betsaida’s case has been long and difficult. Simultaneous to their removal—commonly known as deportation—cases, some detained immigrants have the opportunity to petition for bond. Immigrants who are granted bond have the opportunity to pay their way out of detention. After six months in detention, Betsaida became eligible for a bond hearing, and she eagerly pursued this opportunity for release and reunification with her son. When her hearing arrived, Betsaida was denied bond. She was later denied asylum. With the help of Florence Project staff and pro bono attorneys, Betsaida appealed these decisions and her prolonged detention. The process lasted two years. During all of this time, Betsaida didn’t see her son.

Thanks to the support and advocacy of a network of Florence Project staff, pro bono attorneys, and loving community members, Betsaida’s bond and asylum cases were reopened. She was released on bond in April, and she now lives with her son. She is happy, proud, and honored to be free. Still, her struggle is ongoing. Betsaida’s two older children remain in Guatemala. Her asylum case is still in progress. She dreams of a day when she has legal status and when all of her children can live with her in the United States.

“I missed my daughter’s Quinceañera, because I was in detention. Nahum was only 11 when we came, and now he’s 13, practically grown. So much happened. Sometimes, [when I was detained], I thought I couldn’t bear it. But my children were my strength. They always said, ‘Mommy, you are strong. You have to keep fighting.’”

Though they can’t erase the two years they spent apart, Betsaida and Nahum are overjoyed to be back together. They spend long hours chatting, playing, and, of course, laughing.

“Just yesterday, at midnight, Nahum came and hugged me and said, ‘I am so glad you’re with me.’”

“When I was in detention,” said Betsaida, “you all became my family.”

Betsaida lists her new family members: Florence Project attorneys and social workers. Pro bono attorneys. Pastors who visited her weekly. Her fellow detainees. This was a long list of women; a long list of daughters, sisters, and mothers.

“I love the Florence Project so much, because you are always giving us so much love, supporting us, and being a part of our families.”

In the days after her release, while waiting to reunite with her son, Betsaida stayed with a local pastor who had been supporting her. Florence Project attorney Katie visited her while she was there.

“I brought my two sons with me to drop off some breakfast,” Katie said. “What’s notable to me is that she was just so warm with them. That’s not an obvious way to be when you’re just out of detention and with children you’ve never met, but Betsaida is always so caring and loving and affectionate.”

We recognize that “mother” is an identity not determined by biology and not confined to the years that a woman actively raises a child. Motherhood means love, strength, sacrifice, and so much more. We are honored to support our clients as they fight for their families, and we are inspired by the nurturing that they offer us.