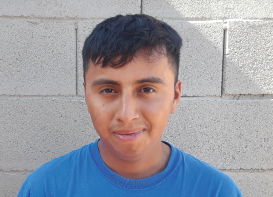 Alfonso, like many Florence Project clients, was separated from his mother by thousands of miles, multiple borders, and many years. When Alfonso came to the U.S., he had no idea what the asylum process would entail. The only thing he knew was that he had not seen his mother in fourteen years, and he desperately wanted to be with her.

Alfonso grew up in Guatemala. Around the age of seven, he started experiencing epileptic seizures which were nearly impossible to control. Alfonso recalled the numerous obstacles he encountered in looking for a treatment: “The doctors would give me medicines that didn’t do anything, and there basically were no specialists in Guatemala.”

In addition to his medical issues, Alfonso endured abuse and neglect. “My father abandoned me.”

His mother fled Guatemala when Alfonso was young, and his father left him in the care of his grandmother. His grandmother frequently beat him and refused to believe that his epilepsy was real, sometimes even withholding his medication in order to punish him.

When Alfonso was sixteen, he journeyed to the U.S. in hopes of being reunited with his mother. After he crossed the border, he was detained in an immigration facility before reunifying with his mother and his siblings in Arizona. Unfortunately, this was not the end of the journey.

Alfonso’s mother knew that, unless they fought for him to stay in the U.S., their reunification would be short-lived. She brought Alfonso to the Florence Project office because she knew it was the only place where Alfonso could secure quality, free legal representation. Florence Project attorneys worked diligently to build trust with Alfonso to better understand his asylum claim.

One attorney, Larry, was impressed by Alfonso’s level of commitment, not only to his case but also to his future. Alfonso would come prepared for every appointment, sometimes riding for hours on the bus back and forth from the Florence Project office. “Alfonso is a truly resilient kid,” said Larry. “In spite of all that he’s been through, he doesn’t let hardship be a barrier to his success.”

After submitting Alfonso’s asylum application and gathering evidence, Larry and Alfonso prepared for the most painful step of the process: the asylum interview. For many of our young clients, being interviewed by an asylum officer is a retraumatizing experience. They are made to sit with a complete stranger and tell the full story of what they have suffered during an interview that sometimes lasts for hours.

On the day of his interview, Alfonso turned to Larry to center himself just before speaking to the asylum officer. “I felt so anxious,” he said. “But Larry helped me to breathe and relax. He helped me feel better.” Thanks to you, the staff at the Florence Project was able to advocate for Alfonso, and he was granted asylum. Alfonso and his family will stay together, safe from harm.